I was going through some old blog posts a few days ago and realized that I purchased my current home desktop computer more than seven years ago and it’s still running strong. I credit that largely to the fact that it’s a desktop with room for expansion, and not a laptop where things are quite limited. Here’s a photo taken not too long after I had set it up back in 2009: 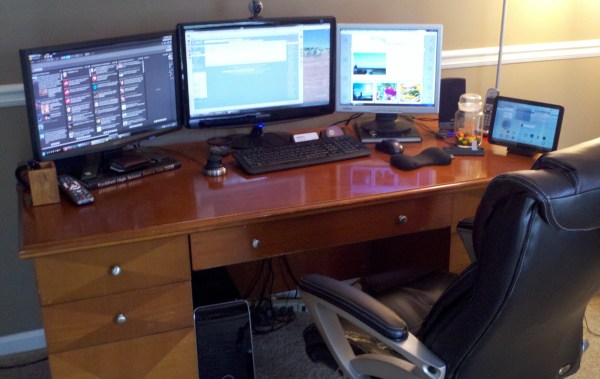 It looks a bit different now (replaced the smaller monitor on the right), but from the outside it’s mostly the same — it’s the inside that has changed quite a bit over the years.

This is where desktop computers shine: a colleague of mine recently had the video board on her Macbook die and that was pretty much the end of the Macbook. Macbook video boards are soldered onto the main board, and thus the entire laptop was essentially dead. Just shy of $4,000 later, she’s up and running again with a sweet new Macbook.

Conversely, I’ve upgraded the video card on the desktop a few times over the years to help it keep up. In fact, I’ve done a number of upgrades to it.

Video card: I started with two cards to handle the three monitors, later moved to a single Radeon 5770 to handle the load, and recently replaced that with a GeForce GTX 1060. The cards aren’t cheap, but they’re much less expensive than replacing the entire computer.

Hard drive: A few years ago I switched out the hard drive for an SSD (solid state drive), which runs around 10x faster. If you’ve ever used a computer with an SSD, you know how very fast they can be.

Memory: I initially purchased the computer with 8GB of RAM, but upgraded to 16GB earlier this year.

The only part that is rather difficult to upgrade is the main processor, since you typically need a new motherboard to go with it (which then may cause some of your other pieces to need replacement). I focused the initial purchase on a fast processor so that I wouldn’t need to replace it, with the thought of replacing other parts along the way to keep it moving fast. So far, so good!

My computer at the office is quite similar. Here’s an old post with a bit more about that one and below is a photo: 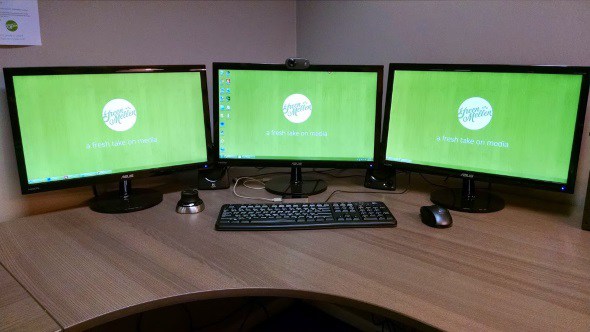 My wife is in need of a new computer for her office at the house, and I’m thinking I’ll go with a full-size desktop for her as well. Her last computer was an all-in-one; it looked nice, and wasn’t too bad, but is essentially impossible to upgrade. She still has a decent laptop (and we have Chromebooks galore at our house), so building a powerful, upgradable desktop should be a great machine for her to use at home for many years to come.

The other way that people tackle computer setups is to go laptop-only; buy a very powerful laptop, and haul it around anywhere you go. I’ve considered that a few times, but I’m quite pleased with my current setup. Everything syncs automatically (primarily using Google Drive, Dropbox and Gmail), so I can sit at any machine and get things done. With my new Chromebook to use on the go (along with my older Windows laptop for some situations), it all comes together rather nicely.